This post announces Ray, a framework for efficiently running Python code on clusters and large multi-core machines. The project is open source. You can check out the code and the documentation.

Many AI algorithms are computationally intensive and exhibit complex communication patterns. As a result, many researchers spend most of their time building custom systems to efficiently distribute their code across clusters of machines.

However, the resulting systems are often specific to a single algorithm or class of algorithms. We built Ray to help eliminate a bunch of the redundant engineering effort that is currently repeated over and over for each new algorithm. Our hope is that a few basic primitives can be reused to implement and to efficiently execute a broad range of algorithms and applications.

With regular Python, when you call a function, the call blocks until the function has been executed. This example would take 8 seconds to execute.

With Ray, when you call a remote function, the call immediately returns a future (we will refer to these as object IDs). A task is then created, scheduled, and executed somewhere in the cluster. This example would take 1 second to execute.

Note that the only changes are that we add the @ray.remote decorator to the function definition, we call the function with f.remote(), and we call ray.get on the list of object IDs (remember that object IDs are futures) in order to block until the corresponding tasks have finished executing.

A graph depicting the tasks and objects in this example. The circles represent tasks, and the boxes represent objects. There are no arrows between the 8 separate tasks indicating that all of the tasks can be executed in parallel.

In contrast with bulk-synchronous parallel frameworks like MapReduce or Apache Spark, Ray is designed to support AI applications which require fine-grained task dependencies. In contrast with the computation of aggregate statistics of an entire dataset, a training procedure may operate on a small subset of data or on the outputs of a handful of tasks.

Dependencies can be encoded by passing object IDs (which are the outputs of tasks) into other tasks.

A graph depicting the tasks and objects in this example. The circles represent tasks, and the boxes represent objects. Arrows point from tasks to the objects they produce and from objects to the tasks that depend on them.

Ray uses actors to share mutable state between tasks. Here is an example in which multiple tasks share the state of an Atari simulator. Each task runs the simulator for several steps picking up where the previous task left off.

Each call to simulator.step.remote generates a task that is scheduled on the actor. These tasks mutate the state of the simulator object, and they are executed one at a time.

Like remote functions, actor methods return object IDs (that is, futures) that can be passed into other tasks and whose values can be retrieved with ray.get. 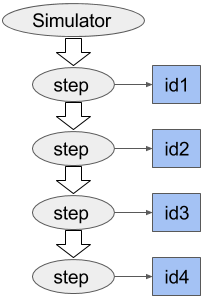 A graph depicting the tasks and objects in this example. The circles represent tasks, and the boxes represent objects. The first task is the actor's constructor. The thick arrows are used to show that the methods invoked on this actor share the underlying state of the actor.

Waiting for a Subset of Tasks to Finish

This primitive makes it easy to implement other behaviors, for example we may wish to process some tasks in the order that they complete.

Note that it would be straightforward to modify the above example to adaptively launch new tasks whenever a previous one completes.

Serializing and deserializing data is often a bottleneck in distributed computing. Ray lets worker processes on the same machine access the same objects through shared memory. To facilitate this, Ray uses an in-memory object store on each machine to serve objects.

To illustrate the problem, suppose we create some neural network weights and wish to ship them from one Python process to another.

To ship the neural network weights around, we need to first serialize them into a contiguous blob of bytes. This can be done with standard serialization libraries like pickle.

The time required for deserialization is particularly important because one of the most common patterns in machine learning is to aggregate a large number of values (for example, neural net weights, rollouts, or other values) in a single process, so the deserialization step could happen hundreds of times in a row.

To minimize the time required to deserialize objects in shared memory, we use the Apache Arrow data layout. This allows us to compute offsets into the serialized blob without scanning through the entire blob. In practice, this can translate into deserialization that is several orders of magnitude faster.

In this example, we call ray.put explicitly. However, normally this call would happen under the hood when a Python object is passed into a remote function or returned from a remote function.

This project is in its early stages. If you try it out, we’d love to hear your thoughts and suggestions.